The purpose of the IACC meeting is to discuss business, agency updates, and issues related to autism spectrum disorder (ASD) research and services activities. The meeting will be open to the public and will be accessible by webcast and conference call.


Schedule is subject to change. Meeting may end prior to or later than 5:00 PM depending on the needs of the committee. For more information on upcoming events, please see https://iacc.hhs.gov/meetings/ 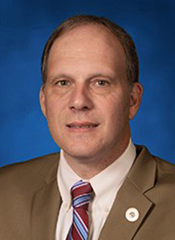 Rep. Franklin Foil is the representative for East Baton Rouge, LA. He has held this position since 2008. His committee assignments include Chairman of Homeland Security, Vice Chairman of Appropriations, Joint Legislative Committee on the Budget, Natural Resources, and Military and Veteran’s Affairs. He is a captain in the U.S. Navy Reserves Judge Advocate General’s (JAG) Corp and currently serves as an Appellate Military Judge in Washington, DC. Recently he sponsored the introduction of the Achieving a Better Life Act Experience (ABLE) Act, which enables people with disabilities to create a tax-free savings account, into Louisiana. He has also passed legislation to require insurance companies to cover medical treatment for children on the autism spectrum, create private school tuition assistance program for children with disabilities, expand law to allow children with disabilities to get child support past the age of 18, create tax credit for employers who hire people with disabilities, and forbid corporal punishment of kids with disabilities in school. Rep. Foil received a B.A. in political science from Louisiana State University and earned his J.D. from the Loyola School of Law. 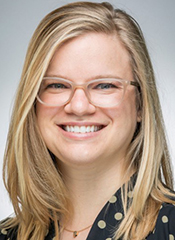 Ms. Lauren Crapanzano Jumonville is Director of Civic Leadership Initiatives for the Baton Rouge Area Foundation. Her department’s current projects include enhancing autism services across Louisiana, implementing a master plan for an urban lake system, and efforts around behavioral health diversion and criminal justice reform. She joined the Foundation in summer 2014 as a project manager after graduating from LSU with an M.B.A., specializing in social entrepreneurship, a movement that is rising in the field of philanthropy. Ms. Crapanzano Jumonville earned her bachelor of arts from Brown University, where she studied human biology with a focus on the brain and behavior. She first worked at the Foundation as an intern in summer 2013.

Pediatric Neuropsychologist, Our Lady of the Lake Physician Group 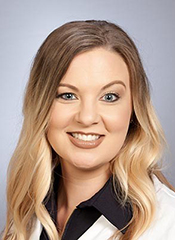 Dr. Traci W. Olivier specializes in neurocognitive evaluations and rehabilitation for children and adolescents experiencing cognitive difficulties that are due to medical and neurological conditions such as developmental disorders, acquired or traumatic brain injuries, seizure-related disorders, brain tumors, and other hematology/oncology diagnoses. Additionally, she evaluates children and adolescents with learning, attentional, and/or psychiatric concerns. Dr. Olivier received her doctoral degree in clinical psychology, with an emphasis on neuropsychology, from Nova Southeastern University in Ft. Lauderdale, FL. She completed her internship at the Kennedy Krieger Institute and Johns Hopkins University School of Medicine, which is designated as a Leadership Education in Neurodevelopmental and Related Disabilities (LEND) program. Dr. Olivier completed a postdoctoral clinical and research fellowship in pediatric neuropsychology at St. Jude Children’s Research Hospital in Memphis, TN.

Former CEO, The Emerge Center for Communication, Behavior, and Development 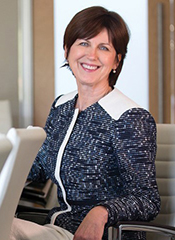 Ms. Melissa Juneau was appointed the CEO of the Emerge Center in 2018 after she oversaw the launch of the Emerge Enterprise, which is comprised of the Emerge Center, the Emerge Foundation, and the Emerge School for Autism, the first charter school in Louisiana for children with autism. She retired from this position in June 2019. Before this appointment, she has served as Executive Director of the Emerge Center, formerly called the Baton Rouge Speech and Hearing Foundation (BRSHF), for approximately twenty years. Ms. Juneau is a licensed Speech-Language Pathologist. She has over thirty years’ experience as a speech therapist working with young children, including work in East Baton Rouge Parish Schools, The Arc, and the Ascension Parish Headstart Program. She holds Bachelor’s and Master’s Degrees in Speech-Language Pathology from Louisiana State University. 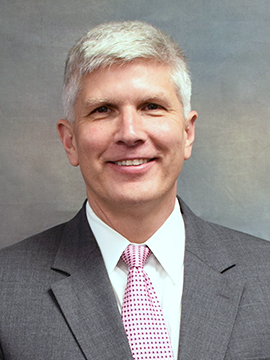 Mr. Stephen Whitlow is the Executive Director of Transition Services for Merakey Gateway. Steve is the father of three children, including a young adult on the autism spectrum. He co-founded the Gateway Transition Center with his wife Ms. Sharon Whitlow, which provided support to autistic teenagers and young adults as they transition to adulthood. The program also included a screen print T-shirt shop, Gateway Ink, in which clients learn to obtain and hold a job in a real-world environment. Merakey adopted the services of Gateway Transition Center in August of 2018. Currently, Gateway provides a Group Skills program to teach social, pre-vocational, and life skills needed to thrive independently. They also provide one on one training programs through the Independence Coaching services. Both of these programs afford the client the opportunity to work at Gateway Ink. Merakey is currently focusing on integrating transition services into housing opportunities to provide lasting fulfillment and independence. Mr. Whitlow received his J.D. from Louisiana State University and practiced law for over 20 years prior to his work in transition services.

Professor in Autism and Neurodevelopmental Disabilities, Steve Hicks School of Social Work, The University of Texas at Austin 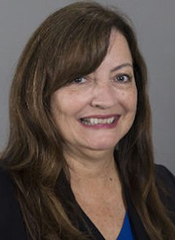 Dr. Sandy Magaña is the Professor in Autism and Neurodevelopmental Disabilities at the University of Texas at Austin. Her research focuses on the cultural context of family caregivers. She is currently investigating racial and ethnic disparities among children with autism and other developmental disabilities and developing culturally relevant interventions. Previously, she was Professor in the School of Social Work at the University of Wisconsin, Madison and Professor in the Department of Disability and Human Development at the University of Illinois at Chicago. At UIC she established the Family Support Research and Training Center (FSRTC) funded by NIDILRR, which she continues to co-direct. The FSRTC engages in research on family members who provide support and care to relatives with disabilities. She received a Master of Social Work from California State University, San Bernardino and her Ph.D. from the Heller Graduate School of Social Policy at Brandeis University. Dr. Magaña completed her post-doctoral training in the NICHD funded post-doctoral program at the Waisman Center, University of Wisconsin-Madison. 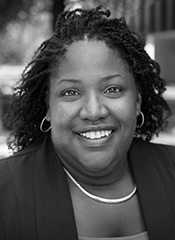 Dr. Temple S. Lovelace is an Associate Professor of Special Education at Duquesne University in Pittsburgh, PA. Her research centers on the intersectionality of disability and race, with particular interest in creating innovative, culturally-sustaining academic and behavioral interventions for students with emotional/behavioral disorders and students with Autism Spectrum Disorders. Dr. Lovelace is a member of the Remake Learning Council, a commission of distinguished leaders from education, government, business and civic sectors in greater Pittsburgh. She is the lead researcher and founder of the Equity X Innovation Lab that is located in the School of Education. This research and development hub has partners across five states and examines systems level issues that impede the progress of culturally and linguistically diverse students in inclusive environments. It also creates contextualized interventions for use in school and community spaces. Over the last eleven years, her work in Pittsburgh with teachers, youth, and families through community-engaged teaching and research has focused on repairing relationships and reducing the trauma that is felt in many educational contexts by culturally and linguistically diverse students with and without disabilities. 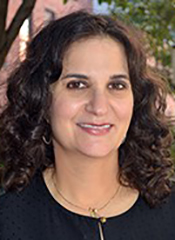 Dr. Sarah Dababnah is an Assistant Professor at University of Maryland Baltimore School of Social Work. She specializes in practice, policy and research related to the health and well-being of families of individuals with intellectual and developmental disabilities. She has specific expertise in the development of interventions to support caregivers of young children on the autism spectrum, particularly those living in underserved communities. She is dedicated to promoting high-quality research and practice for especially vulnerable populations of children with developmental disabilities, including those exposed to intimate partner violence or involved in the child welfare system. Dr. Dababnah earned her M.P.H. from Johns Hopkins University and her M.S.W. and Ph.D. from the University of North Carolina at Chapel Hill. She received specialized training in early childhood and disability practice, research, and policy at the Carolina Institute for Developmental Disabilities, the Kennedy Krieger Institute, the Columbia University National Center for Children in Poverty, and the Jacobs Institute of Women's Health. 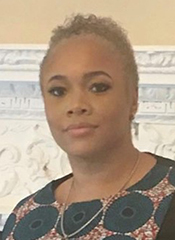 Ms. Camille Proctor founded the Color of Autism Foundation after discovering the lack of support for African American families with children on the autism spectrum when her son received his diagnosis. The foundation works to raise awareness about autism, empower minority families, and ensure that all people with autism receive appropriate and effective services and support. She is a founding member of the National African American Autism Community Network (NAAACN), which is a nationwide coalition of organizations who aim to support and educate African American families affected by autism. 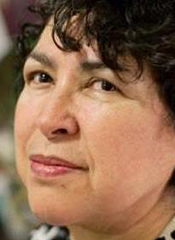 Ms. Matiana Ovalle is a mother of 29-year-old identical twin sons with autism. She has over 18 years of personal and professional experience working with individuals with autism and their families. Ms. Ovalle is the Illinois LEND Family Discipline Coordinator and a Resource and Policy Analyst at the Developmental Disabilities Family Clinics. She is bilingual (Spanish-English) which greatly facilitates her ability to effectively communicate with and support minority families of children with disabilities served in the clinic. She serves as the Coordinator/Advisor for Grupo SALTO and is the Children’s Artistic Director and Vice President of the Mexican Folkloric Dance Company of Chicago, Inc. She has a Bachelor of Science in Communication Disorders, an Associate Degree in Early Childhood Education, and a Private Accountant Diploma. 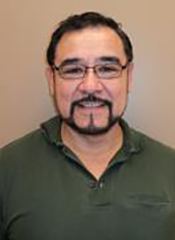 Mr. Jose Ovalle works to empower and represent families in the community and is the father of identical twin adult males with autism. He is a senior advisor of Grupo SALTO, a support group for families who have children with an ASD and whose principal language is Spanish. Mr. Ovalle is an AUCD-LEND 2009-2010 graduate in the family discipline and a member of the AUCD Act Early Illinois chapter. Additionally, he served an active role in Advancing Futures for Adults with Autism (AFAA). Mr. Ovalle is a governor’s appointed board member for the Illinois Council on Developmental Disabilities (ICDD). 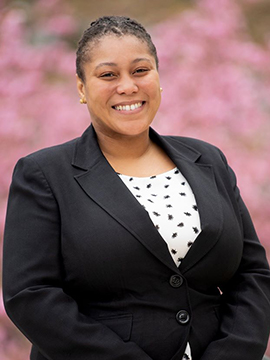 Ms. Yetta Myrick is the mother of teenage son with an Autism Spectrum Disorder and Intellectual Disability diagnosis. She is the Founder and President of DC Autism Parents (DCAP), a 501(c)(3) non-profit organization in the District of Columbia, where she oversees the daily operations and has created programs for children diagnosed with autism and their families. She was selected to serve as the Centers for Disease Control and Prevention (CDC)’s Act Early Ambassador to the District of Columbia, promoting developmental monitoring to assist families in getting the help that their child may need early. Ms. Myrick was a Studio Technician for over a decade at the Cable Satellite Public Affairs Network (C-SPAN) prior to joining the Center for Autism Spectrum Disorders (CASD) at Children’s National as the Community Outreach Coordinator in September 2016. Since joining CASD, Ms. Myrick established the CASD Stakeholder Advisory Board (SAB) and a jobsite for Ivymount’s School to Work program. From 2013-2017, she served as the Stakeholder Advisory Board Chair for CASD’s Patient-Centered Outcome Research Institute (PCORI) Grant, "A Community-Based Executive Function Intervention for Low Income Children with ADHD and ASD Research Project." She holds a Bachelor’s Degree in Communication Studies from The Catholic University of America. 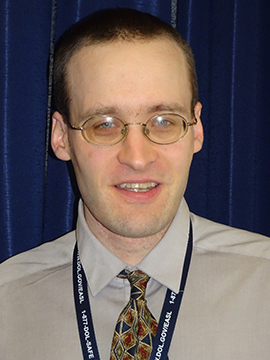 Dr. Scott Michael Robertson, an autistic adult, works as policy advisor on the Youth Policy Team at the U.S. Department of Labor’s Office of Disability Employment Policy. He previously worked as a Joseph P. Kennedy, Jr. Fellow for Senator Tom Harkin in the U.S. Senate Committee on Health, Education, Labor, and Pensions. Dr. Robertson has also served as a Public Member of the federal Interagency Autism Coordinating Committee and a Council Member on the Pennsylvania Developmental Disabilities Council. In 2006, he co-founded the Autistic Self Advocacy Network (ASAN) as a national 501(c)(3) nonprofit organization, and then served as the Founding Vice President. Dr. Robertson completed his Ph.D. in information sciences and technology at Penn State University after investigating cyber- and face-to-face bullying of autistic youth for his dissertation study.


Back to Top
View Archived Meetings >