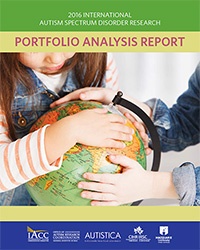 Over the past nine years in the United States (U.S.), the Office of Autism Research Coordination (OARC) at the National Institutes of Health (NIH) has published an annual report describing and analyzing the autism spectrum disorder (ASD) research portfolio across multiple government and non-government funders in the U.S. The report provides comprehensive information about autism research funding to the Interagency Autism Coordinating Committee (IACC), a U.S. federal advisory body, to help in its efforts to monitor ASD research efforts and trends. For the first time, a similar approach has been used to analyze ASD research across four countries – the United States, the United Kingdom, Canada, and Australia – to better understand the global ASD research funding landscape.

A collaboration of four international agencies and organizations - OARC/NIH in the United States, the non-profit organization Autistica in the United Kingdom, the Canadian Institutes of Health Research (CIHR) in Canada, and researchers from Macquarie University in Australia - collected and analyzed information about research projects supported by thirty-four funders of research, including government agencies and private organizations across the four countries. The total funding for ASD research totaled $395.9 million USD and spanned 1,552 projects in 2016. The report compares levels of funding across several categories of research, provides information on agencies and organizations that support ASD research in each country and describes the types of institutions that received ASD research funding. Research projects were categorized according to the seven research priority areas in the IACC Strategic Plan for Autism Spectrum Disorder: Diagnosis & Screening, Biology, Risk Factors, Treatments & Interventions, Services, Lifespan Issues, and Infrastructure & Surveillance. Analysis of the data revealed that all four countries contributed funding or maintained ongoing projects in each of the seven research priority areas, but each country had a different distribution of research funding across the seven areas. Information about each country’s strategy for supporting ASD research is described in the report. Project data used to develop this report are available on the Autism Research Database.

The 2016 International ASD Research Portfolio Analysis Report represents the first year that data on ASD research funding were collected and reported on a multinational scale. This report provides an opportunity to assess current investments in ASD research among different countries and identify areas that may be opportune for future investment. This analysis fostered international collaboration and identified global trends in ASD research funding in the hopes of accelerating and inspiring research that will benefit the autism community. Future iterations of this report will aim to include additional countries and funders that may wish to participate to more fully represent ASD research efforts around the world.

The IACC is a Federal advisory committee that was created by Congress in an effort to accelerate progress in ASD research and services. The IACC works to improve coordination and communication across the Federal government and work in partnership with the autism community. The Committee is composed of officials from many different Federal agencies involved in autism research and services, as well as adults on the autism spectrum, parents and family members of individuals on the autism spectrum, advocates, researchers, providers, and other public stakeholders. The documents and recommendations produced by the IACC reflect the views of the Committee as an independent advisory body and the expertise of the members of the Committee, but do not represent the views, official statements, policies or positions of the Federal government. For more information on the IACC, please visit: www.iacc.hhs.gov.