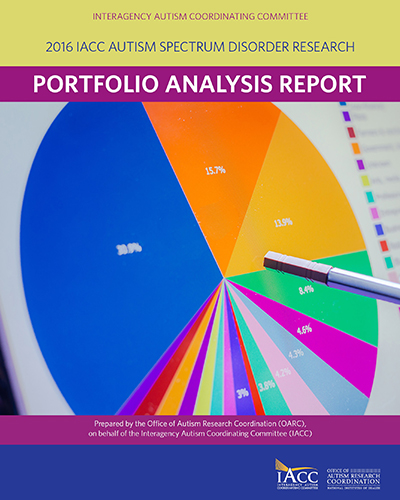 ASD Research Areas and Progress in 2016


What areas of ASD research were funded in 2016?

To better understand what areas of research were funded in 2016, projects were aligned with the questions in the 2016-2017 IACC Strategic Plan. Figure 9 illustrates the breakdown of the research funding per each of the Strategic Plan’s seven questions, which are related to Screening and Diagnosis (Q1), Biology (Q2), Risk Factors (Q3), Treatments and Interventions (Q4), Services (Q5), Lifespan Issues (Q6), and Infrastructure and Surveillance (Q7). Identifying how current research investments correspond to the Strategic Plan provides an understanding of how funders have directed investments across each of the priority areas identified by the IACC, as well as an indication of which areas are well-supported versus those that may need additional attention or development. 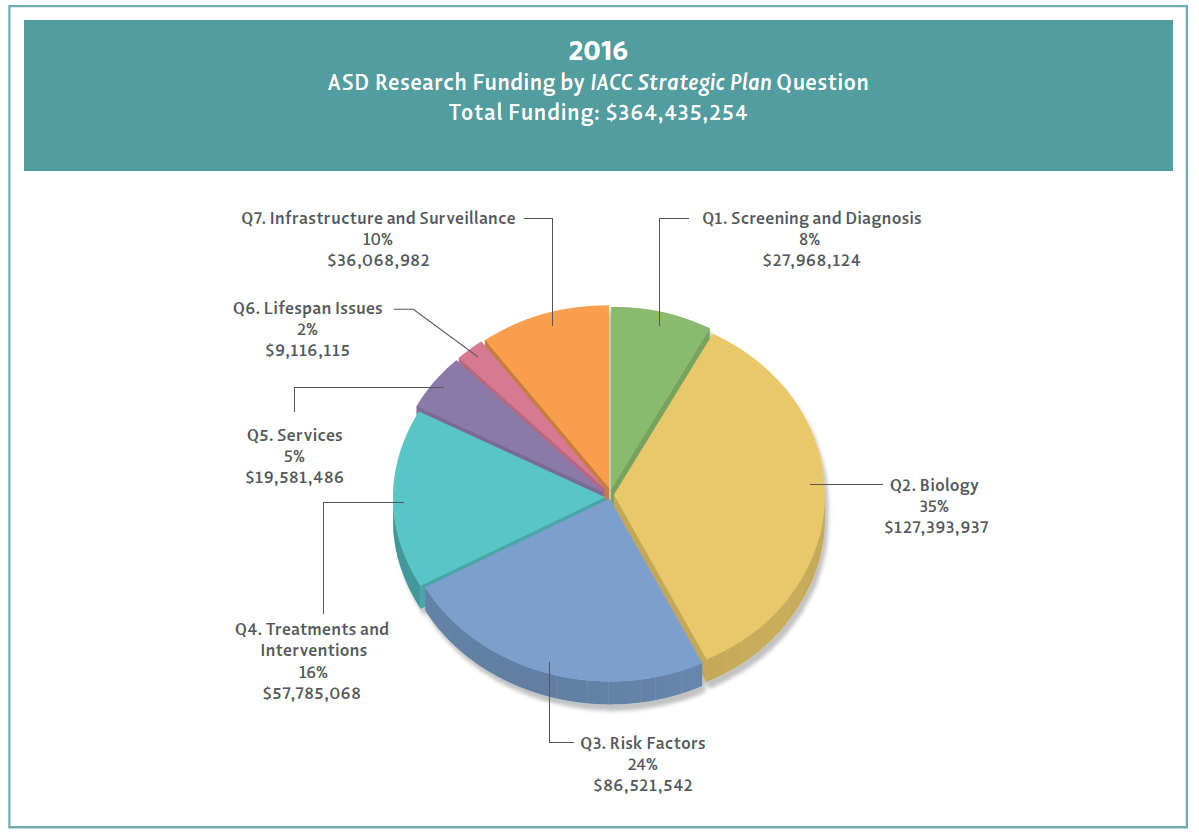 Figure 9. Topic areas are defined by each question in the IACC Strategic Plan. The seven questions of the Strategic Plan are represented in the clockwise direction, beginning with Screening and Diagnosis (Question 1) and ending with Infrastructure and Surveillance (Question 7).

ASD research funding in 2016 supported projects relevant to all seven questions in the IACC Strategic Plan for ASD Research. As in previous years, the largest portion of funding addressed the underlying biology (Question 2) of ASD (35%). This was followed by Question 3 (Risk Factors), research aimed at identifying potential causes and risk factors for ASD (24%). While Question 3 was the second highest funded research question in 2015, it saw a significant increase in its portion of funding in 2016 compared to 2015 (18%). Research into treatments and interventions for ASD (Question 4), including behavioral therapies, pharmacological treatments, and technology-based interventions, followed with 16% of total funding in 2016 – which was relatively the same as previous years. Investment in research infrastructure and surveillance (Question 7) was 10%, a slight decrease from 2015 (16%). Research to improve screening and diagnosis of ASD (Question 1) was comparable to previous years with 8% of research funding in 2016. Research focused on services (Question 5) and lifespan issues (Question 6) remained the smallest areas of funding. Question 5 was 5% of ASD research funding and Question 6 was 2% of funding. For Questions 5 and 6, the percentages of funding were similar to those seen in 2015. Some shifts in funding and project distribution among the question areas were related to the new objectives of the 2016-2017 Strategic Plan; these observations will be discussed in more detail in the specific question chapters.

When the number of projects that align with each question is considered, as opposed to the total funding for these projects, the distribution is slightly different due to differences in the relative sizes of projects falling under each of the seven question topics. In 2016, the percentage of total projects aligned with each question were as follows: Question 1, 8%; Question 2, 36%; Question 3, 18%; Question 4, 19%; Question 5, 6%; Question 6, 3%; Question 7, 10% (Figure 10). The proportion of projects stayed relatively constant from previous years, however, Question 4 did see a significant drop in its percentage of the project count total. This decrease is due to the new 2016-2017 Strategic Plan objectives, in which some projects previously assigned to Question 4 were better suited in other question areas due to the new objectives' aims. This will be addressed in Question 4's section of the report. 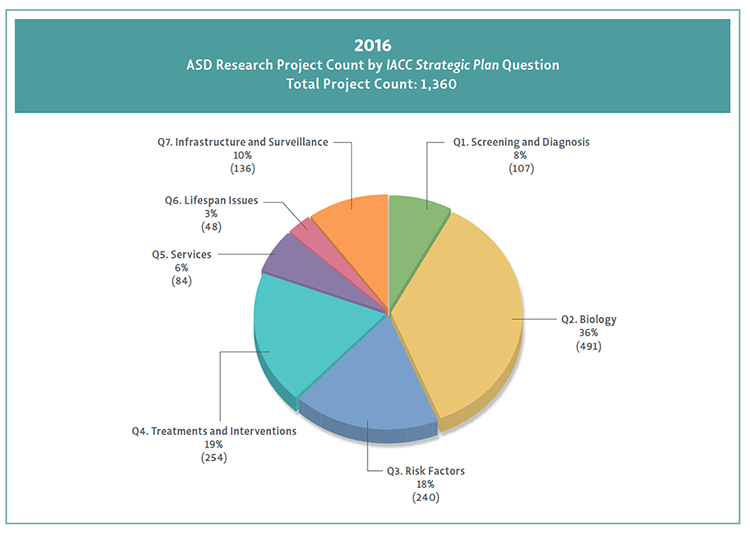 How many new research projects were added in 2016 compared to ongoing research?

Each project included in the Portfolio Analysis is classified as either "Ongoing or "New." Ongoing projects were active in a previous year, and new projects became active and received funding for the first time in the current year of analysis. In 2016, approximately 71% of overall ASD research funding went to ongoing projects while 29% went to new projects. Since most research projects are funded over multiple years, a larger number of ongoing projects compared with new projects is expected. Research related to lifespan issues (Question 6) had higher proportions of funding devoted to new projects compared to the other question areas. The IACC has emphasized the need to expand research in this area, which was highlighted in the 2016-2017 IACC Strategic Plan’s budget recommendation. While Question 6 consistently has been the least funded research area over the years, a burst in newly-funded projects in this research area is promising for the field. In contrast, funding for screening and diagnosis (Question 1) and services (Question 5) had a higher portion of funding going to ongoing projects when compared to other questions. Question 1 and Question 5 could be expected to have more ongoing projects in 2016 since each question had a greater percentage of new projects in 2015 (Question 1, 28% in 2015; Question 5, 30% in 2015) (Figure 11). 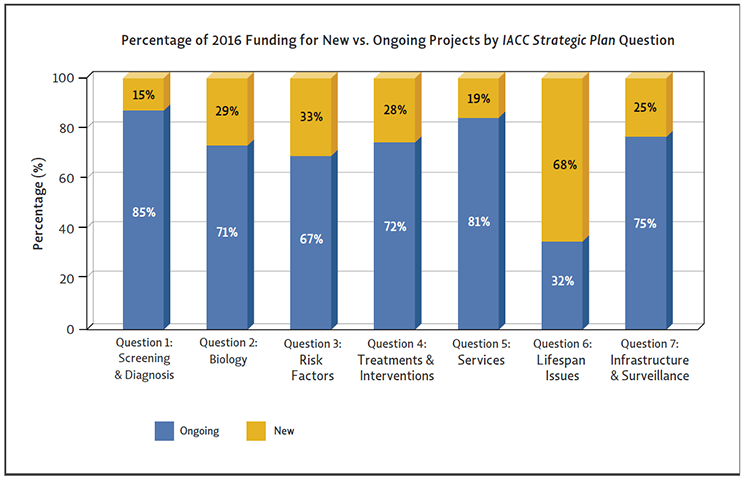 Figure 11. The percentages of ASD research funding going to ongoing versus new projects varies between Strategic Plan questions in 2016.

What types of research are funded by the different agencies and organizations?

The federal and private funders included in this Portfolio Analysis Report fund a wide range of autism-related research projects. As shown in Figure 12, federal and private funders contributed to funding for each of the question areas in the IACC Strategic Plan for ASD in 2016. However, the proportions of federal and private funding vary by question area, suggesting that some areas align more closely with federal or private mission areas, priorities, and/or capabilities. For example, infrastructure and surveillance projects (Question 7) received nearly equal support from federal and private sources, while research on screening and diagnosis (Question 1) and treatments and interventions (Question 4) are largely supported by funding from federal sources. Figure 13 shows the agencies and organizations that funded projects in 2016 in each of the seven question areas of the IACC Strategic Plan. Figure 14 provides a graphic illustrating the breadth of the mission areas of the funding agencies and organizations included in the IACC Portfolio Analysis Report. While some agencies and organizations have broad portfolios that cover many different research areas described in the IACC Strategic Plan, others focus their efforts on a narrower range of research topics. 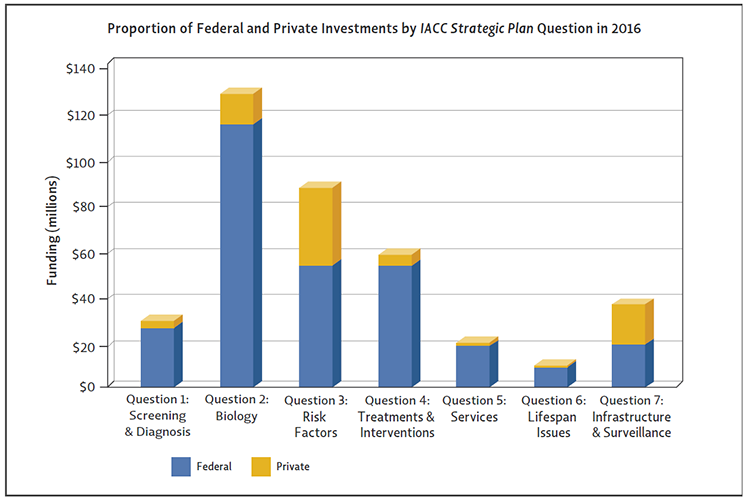 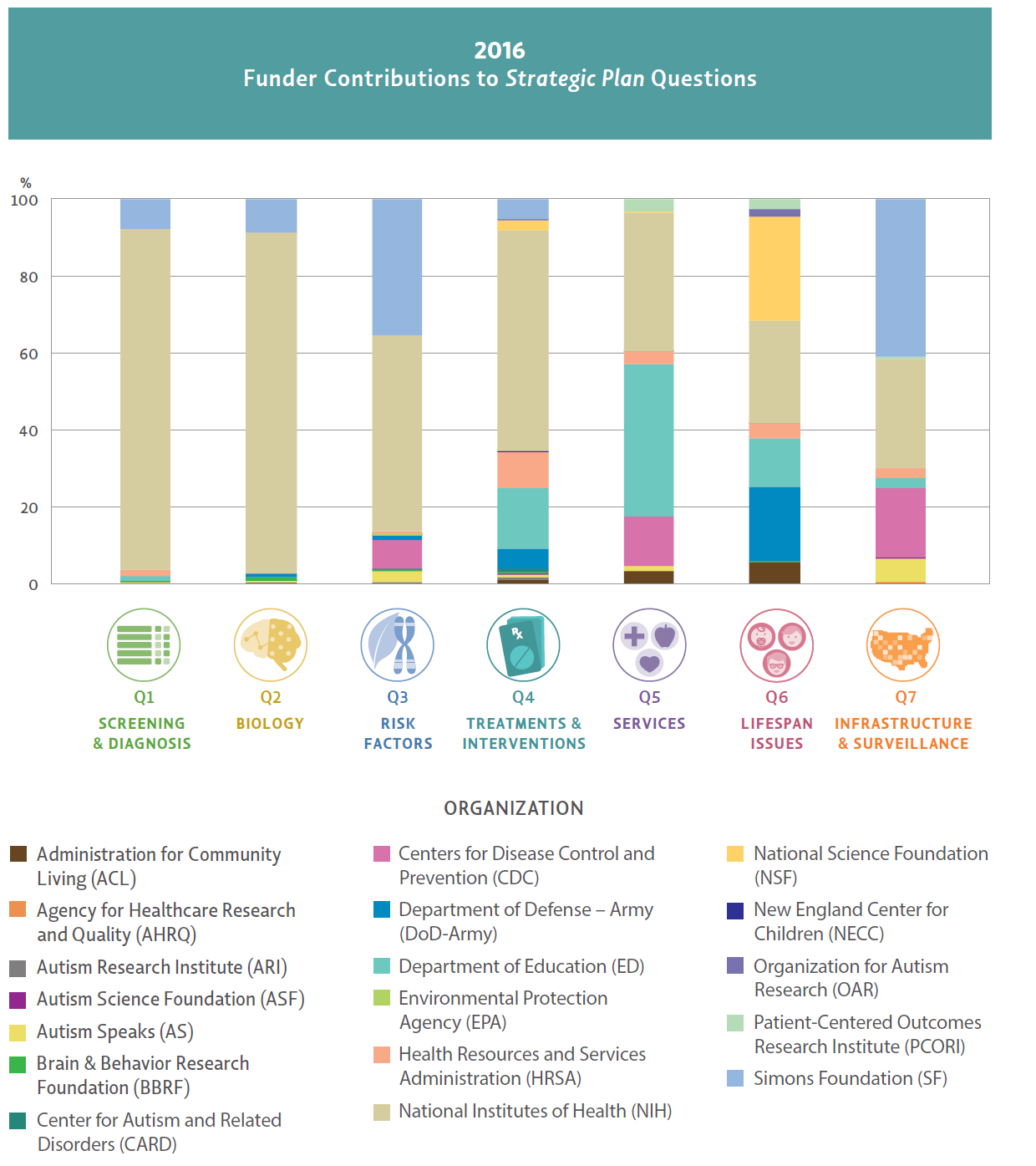 Figure 13. The proportion of each federal agency and private organizations' funding in the portfolio analysis organized by IACC Strategic Plan question for 2016. 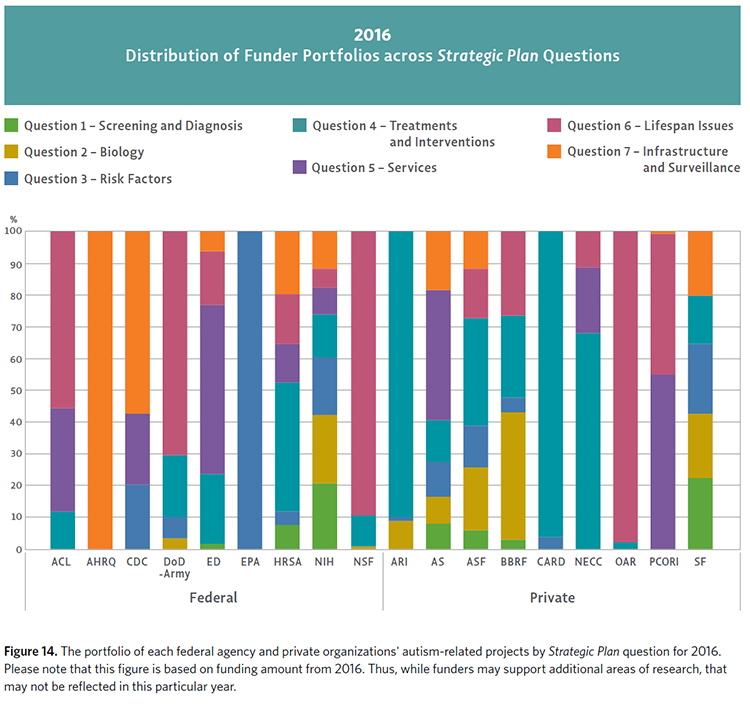 Figure 14. The portfolio of each federal agency and private organizations' autism-related projects by Strategic Plan question for 2016. Please note that this figure is based on funding amount from 2016. Thus, while funders may support additional areas of research, that may not be reflected in this particular year.

How did the research projects funded in 2016 align with the objectives in the IACC Strategic Plan?

The 23 IACC Strategic Plan objectives were developed by the IACC to set priorities for investment, and they represent areas where the Committee perceived gaps in research that required increased efforts. All autism research-related projects in 2016 were matched with the best fitting question and research objective in the Strategic Plan. In some cases, based on the project description, a given project did not fit closely with any of the Strategic Plan objectives and could only be assigned to a Strategic Plan question. Those projects were assigned to “Core/Other” rather than to a specific objective. The Core/Other category captures projects that may be related to cross-cutting or “core” activities that help support the autism research field, projects in well-established areas of science that do not fit within the parameters of the specific research objectives outlined in the Strategic Plan, or that represent emerging areas of research. The Core/Other designation was developed by the IACC because the Committee felt it would help readers understand that even though activities in this category fall outside the specific research objectives of the Strategic Plan, they represent projects that are contributing in important ways to the progress of ASD research. 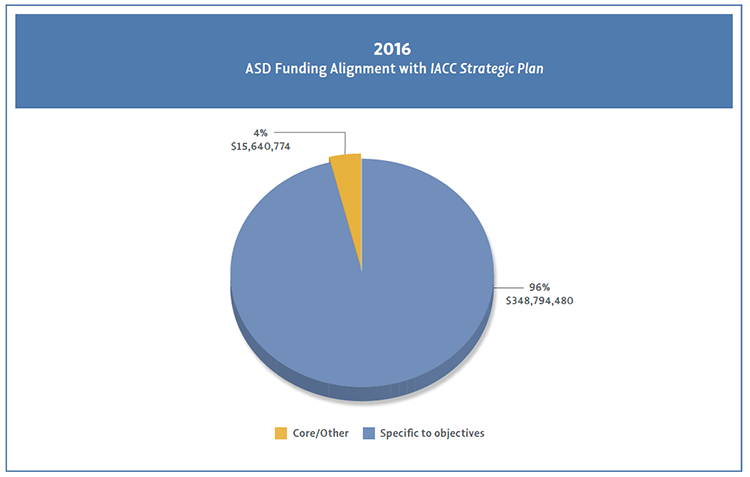 Figure 15. In 2016, 4% of funding went to projects that were not specific to a particular Strategic Plan objective, and were designated Core/Other. 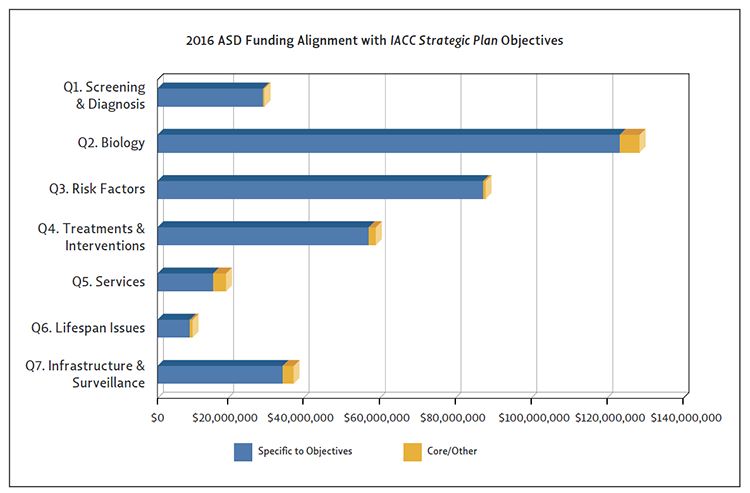 Figure 16. In 2016, the majority of funding for ASD projects was assigned to a specific objective within the IACC Strategic Plan questions. However, each question in the Strategic Plan contained projects that were not specific to a particular objective, designated Core/Other. Funding for projects that fall under specific objectives are indicated in blue, and Core/Other projects are indicated in yellow. Subcategory analysis provided within the summary for each question of the Strategic Plan provides a description of the research areas addressed by all projects, including those assigned to Core/Other.