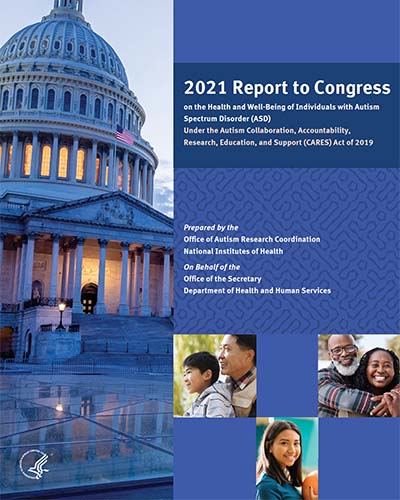 
This portion of the Report covers Section 399DD(b) (2)(A) of the Public Health Service Act, as amended by the Autism CARES Act of 2019, which requires: information on (A) "demographic factors associated with the health and well-being of individuals with autism spectrum disorder." Approximately 1 in 54 children in the U.S. has been identified with ASD according to CDC's ADDM surveillance data.1 In addition to the CDC, prevalence and demographics data are also collected by other agencies using a variety of methods in different subpopulations of the autism community, covering different perspectives and giving rise to more nuanced data on the prevalence of ASD in different communities. To present an overview of currently available demographic information, the following section presents information on demographic factors provided by the ACL, CDC, CMS, HRSA, NIH, ED, and EPA.

An ACL analysis of existing Medicare administrative claims data for calendar year 201633 has yielded the following insights into the health care needs of individuals with ASD, though findings from these data are not generalizable to or representative of all individuals with ASD.

People with ASD receiving Medicare FFS had high prevalence of congestive heart failure (CHF) (9.3%), chronic obstructive pulmonary disorder (COPD; 9.4%), diabetes (23.0%), hypertension (38.4%), and obesity (20.7%). However, these rates were substantially lower than prevalence for people with IDD overall receiving Medicare FFS for CHF (20.3%), COPD (20.6%), diabetes (32.4%), and hypertension (55.8%). Gross comparisons of these prevalence rates to the U.S. general population34 shows that they range from 0.5 (obesity) to 2.7 (diabetes) times higher among people with ASD. 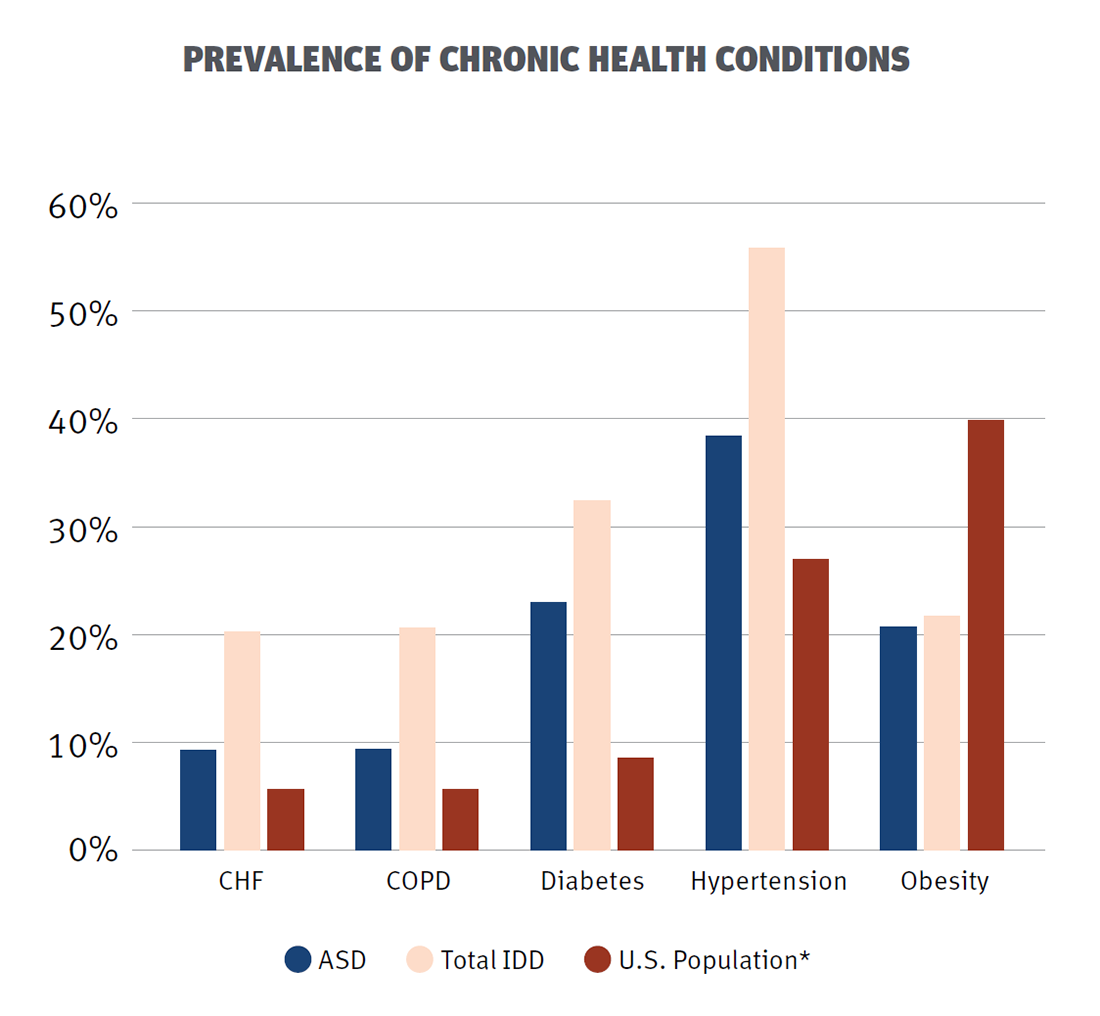 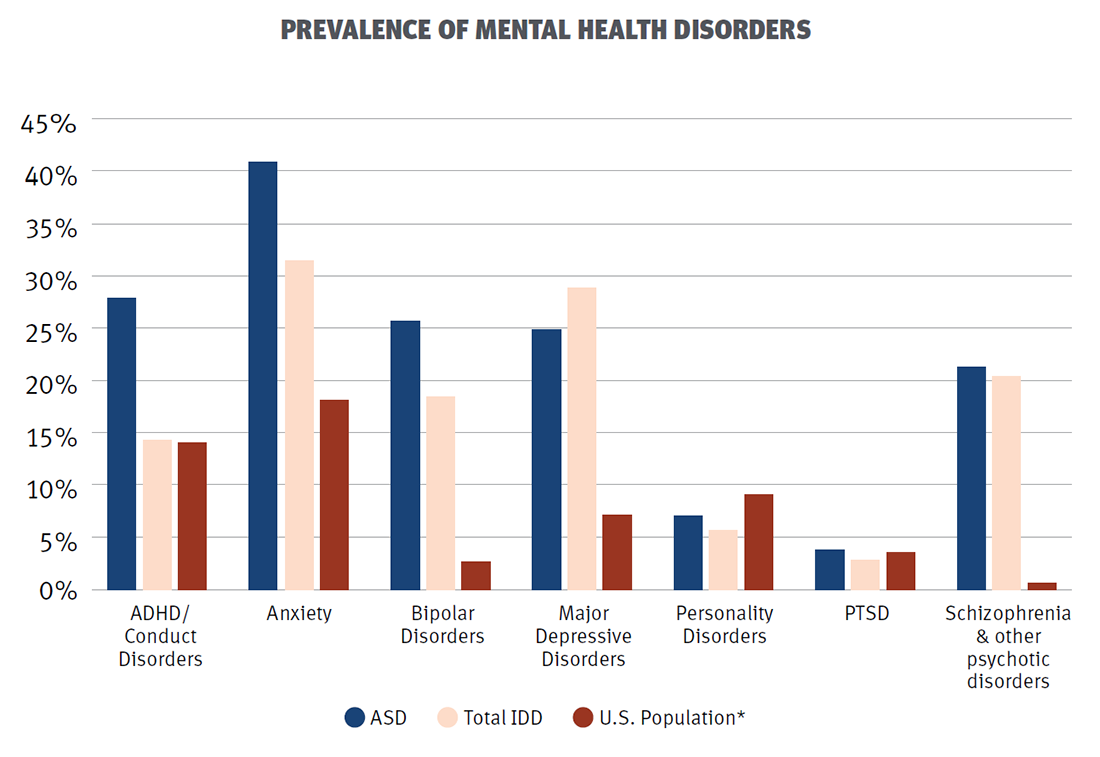 The objectives of SEED are to (1) assess the etiologic (causal) risk factors for ASD; (2) describe the phenotypic variability (differences in observable characteristics) of ASD; and (3) assess the health and health care needs of children with ASD. Through this study, CDC has collected detailed data on family sociodemo-graphics, pregnancy and early childhood exposures, child health developmental characteristics, and use of services by families and their children.

Additionally, in 2020, as part of SEED Phase 3, CDC collected information on the impact of COVID-19 on services, behaviors, and health to help inform public health strategies for children with ASD aged 3 to 9 years and their families, especially during public health emergencies. In-person assessments for ASD were suspended due to COVID-19, but CDC amended the study protocol to collect information to describe the impact of COVID-19 prevention efforts on children with ASD and their families compared to changes among children with other DD and children from the general population. Outcomes of interest among children included education and use of remote learning; changes in use of services and telemedicine; experiences with testing and mitigation strategies; and changes in routines, health, and well-being. Outcomes of interest among families included changes in household structure; health and well-being; finances, employment, and health insurance; changes in routines and support; and experiences with COVID-19 infection. Additionally, the study measured changes in behavior problems and everyday life skills among children before and after COVID-19.

CDC's Autism and Developmental Disabilities Monitoring (ADDM) Network is the only collaborative network that tracks the number and characteristics of children with ASD in communities across the U.S. While past reports from the ADDM Network have consistently found that more White children are identified with ASD than Black or Hispanic children, more recent data have shown progress in closing racial and ethnic disparities gaps in the identification of ASD. However, more work is needed to improve identification of ASD within certain communities. Previous studies have shown that stigma, lack of access to health care services, and non-English primary language are potential barriers to identification of children with ASD, especially among Hispanic children. ADDM Network data have also shown racial and ethnic differences in the types of co-occurring conditions documented among children with ASD in particular; the most recent ADDM Network reports (March 2020) show that Black children identified with ASD are much more likely to have co-occurring ID than White children with ASD. Black children were also less likely to receive a developmental evaluation by 36 months than White or Hispanic children. Differences in identifying children with ASD means that certain groups of children may not be getting the timely services they need to reach their full potential. ADDM Network data can help inform targeted outreach within these communities and promote efforts to have all children screened for ASD.

In 2020, the ADDM Network initiated a pilot project at a majority of ADDM sites to conduct low-cost statewide ASD surveillance using record linkages. Participating states will link multiple data sources to generate autism prevalence estimates for the state and each county in the state for children who were between the ages of 3 and 21 years in 2018. This project will explore the feasibility of conducting low-cost statewide ASD surveillance, compare results to areas overlapping with ongoing ADDM surveillance, and provide county-level information to communities with no local data concerning ASD surveillance.

Among the 6.1 million children with special health care needs covered by Medicaid and CHIP, 21% are age 5 or younger, 38% are 6 to 11 years old, and 41% are 12 to 17 years of age. Thirty-seven percent are non-Hispanic White, 27% are non-Hispanic Black, 8% are other non-Hispanic, and 28% are Hispanic. The household income of almost half (45%) of the families of children with special health care needs was below the federal poverty level.36

Equivalent data is not available for adults.

Information about health care access among children and youth with ASD/DD is available from the HRSA-funded and directed National Survey of Children's Health (NSCH). The NSCH is an annual, nationally representative survey that provides a unique source of national and state-level data on child health and health care, including health care access for children and youth with ASD/DD. The NSCH collects parent-reported information on whether the child ever received an ASD diagnosis by a care provider, current ASD status, health care use, access and challenges, and methods of treatment. A 2018 paper32 using the NSCH examined the national prevalence of ASD among children ages 3 to 17, as well as health care access, health care experiences, and factors associated with increased likelihood of receipt of medication and behavioral treatment.

Data from the NSCH indicates that approximately 1 in 40 children in the U.S. are diagnosed with ASD.37 Boys have a 3.46 times higher prevalence of ASD than girls even after adjusting for selected sociodemographic and birth characteristics. ASD prevalence is 47% higher for children with single mothers than children in two-parent, married households, 2.06 times as high for children from households with income at less than 100% of the federal poverty level compared with children from households at more than 400% of the federal poverty level, and 71% higher in children born preterm than term. ASD prevalence is 2.34 times higher for U.S.-born versus foreign-born children. Children with ASD have more needs and difficulties regarding health care access and use compared to children without ASD but who have other emotional behavioral disorders. Further, the study found that 27% of children with ASD were given medication to treat certain symptoms of ASD in the past year, and 64% received behavioral interventions.

Some NIH-funded research studies may address demographic, social, and other factors that can affect the risk of ASD. For example, lower income, minority, and rural families receive a diagnosis of ASD up to 1.5 years later than other families and are more likely to miss the window of opportunity for early intervention. Researchers funded by the Eunice Kennedy Shriver National Institute of Child Health and Human Development (NICHD) are focusing on the development of a telehealth screener and assessment to improve early screening for ASD in toddlers and identify factors that contribute to disparities in screening and surveillance in diverse communities (R01HD039961). Despite scientific advances and investments, addressing health disparities in access to evidence-based early intervention for children with ASD remains a major challenge. Using a new interdisciplinary network of eight research institutions, NICHD-funded scientists are studying individual and combined effects of two evidence-based interventions in real world settings (R01HD093055). The first engages families to access resources and support when they first learn their child has signs of ASD, using an evidence-based intervention that integrates motivational interviewing and problem-solving education. The other involves coaching families to embed evidence-based interven- tion strategies in everyday activities for toddlers with ASD. The National Institute of Mental Health (NIMH) supports research aimed at developing and testing service system interventions that can be broadly implemented and rapidly engage young children with ASD in evidence-based treatment and services early in life. A number of NIMH-funded research projects focused on early intervention for ASD also aim to address health disparities that medically underserved families from diverse racial and ethnic groups face in their efforts to access ASD screening and treatment interventions (e.g., R01MH104423, R01MH104400, R01MH104355, R21MH118539, R21MH120349).

EPA's America's Children and the Environment (ACE) Report was first initiated by EPA in 2000 and brings together environmental, biomonitoring, and health data from a variety of sources to provide national-level indicator data and related information on the environment and children's health. The goal of the ACE Report indicators is to better understand the impact environmental hazards have on children and educate policy makers, state and local environmental health partners, and the public on trends and areas that need further attention.

For the ACE Report, EPA analyzes and summarizes autism prevalence data from children ages 5 to 17, including survey data first collected in 1997 through 2019, the most for which data is available. Data for the autism indicator are obtained from an annual survey conducted by the CDC's National Center for Health Statistics (NCHS). The survey consists of a parent or other knowledgeable adult in each sampled household being asked questions regarding the child's health status, including if they have ever been told the child has autism. From 2011 to 2013, the term "autism" in the survey was revised to "autism/ autism spectrum disorder." Beginning in 2014, the term "autism" in the survey was revised to "autism, Asperger's disorder, pervasive developmental disorder, or autism spectrum disorder." EPA's review and summary of the autism indicator, as part of the ACE Report, provides more details.

From 1997 to 2013, the percentage of children ages 5 to 17 years reported to have ever been diagnosed with autism rose from 0.1% to 1.2%. This increasing trend is statistically significant. Between 2014 and 2019, the rates of reported autism ranged from 2.3% to 2.9%. The higher reported percentages in these years might be due in part to the recent broadening of the definition of autism used in the survey question, as discussed on the previous page. Figure 3 below provides an overview of autism prevalence over time, based on data obtained from NCHS, including 2019 survey data.

Since 1999, the percentage of children reported to have autism in the U.S. has increased by 12-fold. For the year 2019, the rates of autism reported were approximately 3.3 times higher for boys than for girls, at 4.4% and 1.3%, respectively. This difference is statistically significant. Puerto Rican children (4.6%) had the highest rates of autism, followed by American Indian/Alaska Native (AI/AN) children (3.8%), White children (2.9%), Black children (2.7%), Hispanic children (2.3%), Mexican children (2%), and Asian children (1.7%). The prevalence of autism in 2019 was similar for children living below the poverty level (2.8%) and those living at or above the poverty level (2.6%). 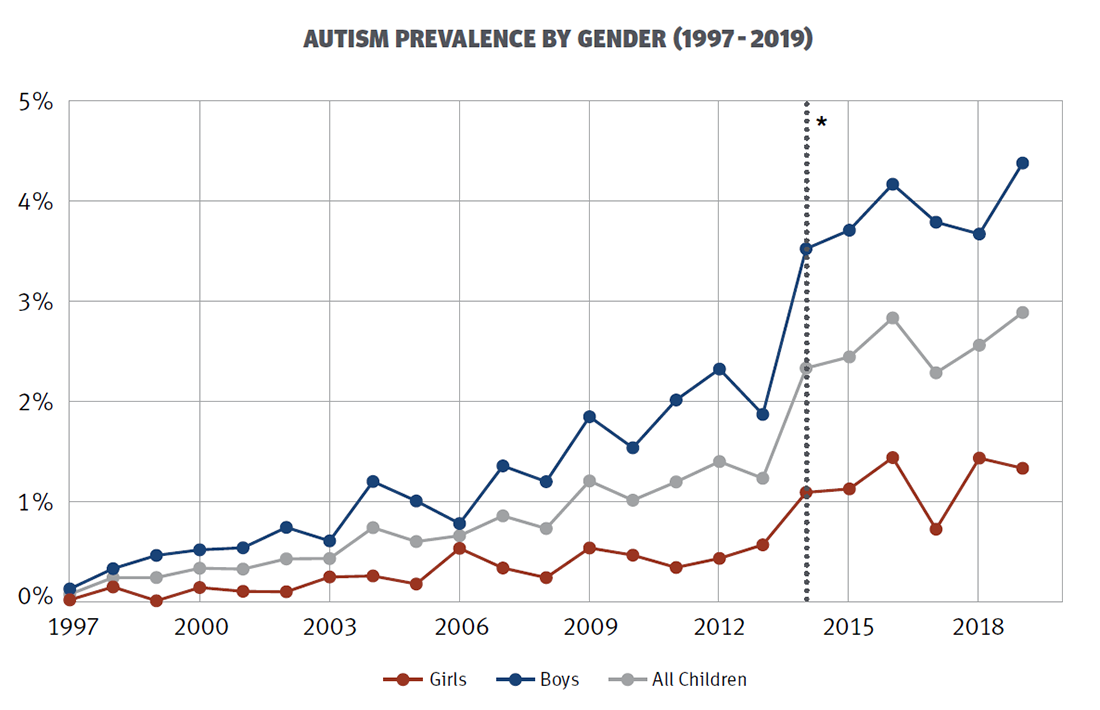 Figure 3. EPA: Prevalence Rates of Autism by Gender from 1997 to 2019
Data for the autism indicator are obtained from an ongoing annual survey conducted by the NCHS.
* In 2014, in the survey the term "autism" was revised to "autism, Asperger's disorder, pervasive developmental disorder, or autism spectrum disorder."