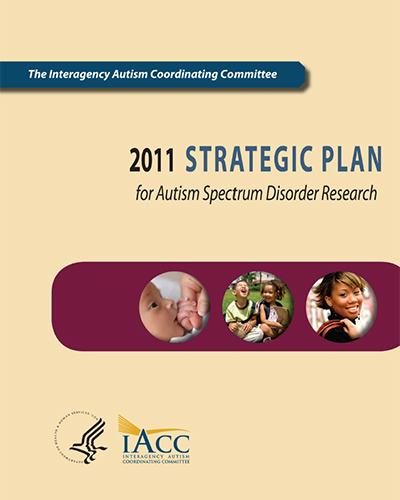 What Do We Know?

A child's caregivers are often first to identify the signs of ASD. In the classic case, there may be delays or plateaus in a child's attainment of developmental milestones, such as the use of gestures, responding to name, or the onset of speech and pretend play. In other cases, the first signs of ASD occur in young children who appear to regress after they seem to have been developing normally. Current diagnostic criteria and classifications of ASD represent progress in identifying a core set of developmental symptoms that, in the past, might have been attributed to other disorders because of more narrowly defined ASD evaluation criteria.

The diagnosis of ASD can be reliably made by age 3, because the core symptoms emerge by that time. However, most children eventually diagnosed with ASD exhibit signs of abnormal development well before the age of 2. Recent studies of children at high risk because of the presence of a sibling with ASD suggest that many cases of autism can be detected by 12 months of age using simple behavioral tests, such as response to calling the child's name or ease of engaging the child in jointly looking at an object (Landa, Holman & Garrett-Mayer, 2007). Nevertheless, the median age of earliest ASD diagnosis is 4½ years of age (CDC, 2009). A number of screening tools have been developed for detecting autism for children of varied ages and different levels of clinical variability. There are tools available for parents and caregivers, including a video glossary of early "red flags" of ASD in young children developed to help families and professionals learn how to identify subtle differences in development that may indicate areas of concern (Wetherby et al., 2007). In terms of diagnosis, there is emerging evidence that tools can be developed with sufficiently high sensitivity and specificity to support epidemiologic and risk factor studies.

Nationwide, there has been an effort to improve early identification of children with ASD to improve their functioning and outcomes. A recently published randomized, controlled trial demonstrated how a comprehensive developmental behavioral intervention for toddlers with ASD led to improvements in cognitive and adaptive behavior, thereby emphasizing the importance of early identification of and intervention for young children with ASD (Dawson et al., 2010). Various public campaigns, including the CDC's "Learn the Signs. Act Early," have been initiated in recent years to raise awareness about the importance of early identification of developmental delays, including those associated with ASD. The American Academy of Pediatrics (AAP) recommends screening children for ASD at 18 and 24 months with a standardized screening tool (Council on Children with Disabilities, 2006).

What Do We Need?

Most cases of autism and related disorders are not diagnosed until after a child's third birthday and sometimes not until adulthood, yet early intervention can have a critical influence on the future course of ASD. Moreover, many children from culturally, linguistically, and other diverse groups may have limited access to assessment services, leading to delays in diagnosis (Mandell et al., 2007). Several issues have limited the use of early interventions. It remains difficult to diagnose ASD in very young children because there is considerable healthy variation in the age at which infants and toddlers reach typical developmental milestones (e.g., speech), and delays do not always indicate the presence of a disorder. The diagnosis of ASD in a person of any age is currently based on behavioral and cognitive signs reflecting abnormal brain development, but not on detection of brain or other biological differences that may be present before the emergence of the behavioral or cognitive signs. The discovery of reliable biomarkers could potentially identify people with ASD, or infants who will subsequently develop or are already developing subtle signs of ASD.

Children with ASD develop along different trajectories. Some show abnormal behavior soon after birth; some develop normally for the first year or longer and then regress; while others appear to later improve significantly. Greater clarity is needed in identifying these different trajectories, and greater consistency is needed in applying their definitions. Health care and other early care and education providers may not have received training in recognizing the early warning signs of ASD. Pediatricians may not have received training on using existing screening tools at well checkups as recommended by the American Academy of Pediatrics (Council on Children with Disabilities, 2006). And some caregivers may be unaware of the early warning signs of ASD or where to access services, leading to delays in diagnosis.

Although families are eager for guidance, more research is needed to better answer the question of when developmental variation should become cause for concern. Studies that test both new and current diagnostic and screening methods and that integrate both developmental and biologic approaches in community-based settings are needed. In particular, studies need to be designed to validate methods in underrepresented minorities and disadvantaged populations. Such studies could increase the understanding of barriers to diagnosis and access to services. Taken together, earlier identification, coupled with increased access to interventions and services, could reduce disparities in health care and service provision and ultimately improve outcomes for people with ASD.

Scientific studies of ASD require the reliable diagnosis of participants, but this can be a time-consuming and labor-intensive process. Therefore, streamlined diagnostic approaches that facilitate the enrollment of research participants are needed. Researchers also need ASD measures that are easy to administer and are sensitive to changes in clinical status. With regard to heterogeneity, identifying characteristics that are specific to certain ASD subpopulations could potentially identify neurobiological and genetic markers and improve our understanding of more global causal and intervention mechanisms.

2011 Addendum To Question 1: When Should I Be Concerned?

What Is New in This Research Area, and What Have We Learned This Past Year?

The prevalence of autism continues to rise, according to the most recent data gathered by the Autism and Developmental Disabilities Monitoring (ADDM) Network, supported by the Centers for Disease Control and Prevention (CDC), indicating that nearly 1% of children in the United States have an ASD diagnosis. This reflects an increase of 57% over a four-year period. Importantly, the mean age at diagnosis did not change significantly over this time period, with most children not diagnosed until age 3 to 5 years (Wiggins, Baio & Rice, 2006; CDC, 2009). A second study from the large National Survey of Children's Health, sponsored by the Health Resources and Services Administration (HRSA), used very different study methods from those used in the ADDM project, but also reported an ASD prevalence rate of approximately 1% in children (Kogan et al., 2009).

Research from three important studies over the past year has pointed to the importance of factors that place children at increased risk for ASD. Findings indicate the role of underlying genetic disorders and prenatal risk factors that may warrant screening and early follow-up, and in some instances more specific medical workup. First, an evidence-based review of a large clinical series of people with ASD and with other developmental disorders concluded that using chromosomal microarray resulted in considerably higher diagnostic sensitivity for genetic testing than did G-banded karyotyping, particularly for submicroscopic deletions and duplications (Miller et al., 2010). Second, a study by Johnson et al. found that very preterm birth (<26 weeks gestational age) was associated with a much higher risk of developing ASD, with a prevalence of 8% diagnosed by age 11. While early gestational age has been identified as a risk factor for ASD, previous studies have lacked the power to examine children born at such vulnerable gestational ages. A third study of 7.9 million children in California showed that older fathers and mothers were more likely to have a child with autism as compared with younger parents (Grether et al., 2009). Evidence is also accumulating on the developmental trajectory for autism. A 2010 prospective study showed little deviation between children who eventually developed autism and typically developing children up to age 6 months, after which time measurable differences emerged (Ozonoff et al., 2010). Importantly, while a decrease in developmental trajectory of skills was found in the majority of children, it was not identified by most parents, suggesting current limitations in the use of parent-identified early markers of ASD in the first year of life. Also, Klin et al. found that as compared with typically developing toddlers, toddlers with ASD paid more attention to stimuli in which sound and motion were synchronous. This difference in sensory processing may be connected to the tendency of people with ASD to focus on the mouth rather than the eyes in conversation.

Two important studies highlighted work on the barriers to early screening and diagnosis. Evaluation of the implementation of the AAP recommendations for developmental surveillance was conducted in 17 diverse pediatric practices and demonstrated reasonable success in implementing ongoing screening (85% of practices screened children at recommended screening ages), but also found that pediatric practices experienced challenges in referral for medical subspecialty care and early intervention (King et al., 2010). A second study evaluated the diagnostic sensitivity of the various parent/caregiver autism Level 2 screening scales for children older than 3 years—beyond the AAP-recommended screening ages—and concluded that even in this older age group, while some tests performed well, overall, more scientific evidence is needed for these instruments (Norris & Lecavalier, 2010).

What Gaps Have Emerged Since Last Year?

Recent data show that girls are diagnosed with ASD at a later age than are boys (Giarelli et al., 2010; Shattuck et al., 2009). Examination of the 2009 IACC ASD Research Portfolio Analysis shows that studies in girls and minority racial/ethnic/socioeconomically disadvantaged populations remains a gap area (IACC, 2010 (PDF – 1.7 MB)). While possible reasons for this disparity—including different clinical manifestations of ASD by gender and cultural differences in accepted or anticipated behaviors in girls relative to boys—are unclear, gender should be included as an important disparity factor in studies examining barriers to early screening and diagnosis.

There are important ethical, legal, and social implications resulting from the study by Miller et al. (2010), particularly relating to screening for genetic and other markers for autism and other developmental disorders. There is a diverse range of opinions in the autism community on early screening for autism, ranging from strong support for developing biologic prenatal screening methods to concerns that such efforts may lead to selected terminations of fetuses showing genetic or other biomarkers of increased risk. It is imperative that autism research proceed with the appropriate precautions and safeguards and that the concerns of the autism community are reflected in this process. At this point, the state of the science is focused on improving early screening in the first years of life to identify risk for ASD in order to initiate early intervention to reduce or prevent the development of disabling symptoms and promote positive skill development.

The study by King et al. (2010) highlights the need for a clearer understanding of the challenges and barriers to screening and referral. Studies are needed to determine the factors that lead to implementing screening and referral programs that successfully serve children with ASD and their families. Studies should include factors relating to the clinical practice, availability, and collaboration among community-based services, and information needs of parents, other caregivers, and early educators.

Research is needed to identify effective methods for identifying children at higher risk for ASD, such as extremely preterm children and children with a sibling with ASD, in community screening efforts. Although the AAP recommends ongoing developmental and autism-specific screening in the first few years of life, establishing risk profiles indicating the need for heightened monitoring of development among some children warrants investigation as an additional tool to improve early identification.

Aspirational Goal: Children at Risk for ASD Will Be Identified Through Reliable Methods Before ASD Behavioral Characteristics Fully Manifest.