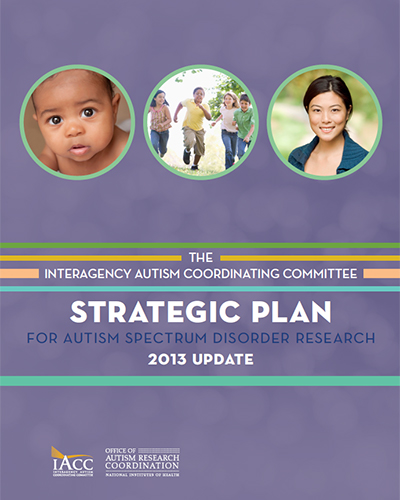 The state of the science has dramatically changed in the ASD field since 2008, reflected in a significant increase over time in the number of journal publications related to ASD research.1 While biological differences in individuals with ASD were hypothesized earlier, now there are data demonstrating specific changes in the genome and epigenome,2–20 gene expression,21, 22 cell structure and function,23–29 brain connectivity,30–32 and behavior33–35 that have been linked to the causes and underlying biology of ASD. Over the past 5 years, genetic studies have revealed that genetic variation ranging from changes in single bases to alteration of large regions of DNA or even extra chromosomes can contribute to ASD risk, and that both inherited and spontaneous mutations can play a role.2–4 Several environmental factors have emerged as potential contributors to ASD risk in the past 5 years, including: prenatal maternal infection,36, 37 preterm birth,38–41 advanced maternal and paternal age at conception,42–48 short inter-pregnancy interval,49, 50 as well as some data suggesting that exposure to air pollution,51–56 phthalates57–59 and pesticides60–62 during pregnancy may also increase risk. Vitamin intake, particularly folic acid,63–65 during the pre-conception period has been identified as a possible protective factor against ASD risk, while both the genetic and environmental data now point to the early months of gestation as a critical period for the development of ASD.

Advances in screening tools such as the Modified Checklist for Autism in Toddlers (M-CHAT) and the Infant-Toddler checklist, with an emphasis on early and repeated screenings, now make it possible to set a realistic future goal to identify 95 percent of children with ASD before the age of 24 months.66–69 New technologies to detect differences in eye-tracking patterns, and new research on white matter tract development and posture control in infants also introduce the potential to detect ASD as early as 2-6 months of age.30, 33–35 This ability for early ASD detection, however, will depend on large community-based validation studies of screening in the general population and only will become clinically useful if efficient, cost effective tools can be designed around these new capabilities. It will also be critical to ensure that following a positive early screening result, parents readily seek diagnosis and intervention, and that there are effective early interventions available. Recent clinical trials of behavioral interventions have demonstrated their positive impact on outcomes and have begun to provide the evidence base needed to support the widespread use of these advances in the community.70–75 However, more needs to be done to make these therapies affordable and scalable to large and diverse community settings, and efforts are needed to increase the number of children who progress from identification in early screens to diagnosis and early intervention. Disparities in access to diagnosis and treatment based on resources, ethnicity, and gender remain another significant challenge.

Studies of animals that carry gene mutations that, in humans, cause syndromic forms of autism have demonstrated that in animals symptoms can be reversed both in early development and in adulthood.76, 77 While these studies may not directly translate to humans, they indicate that some symptoms of autism may be amenable to treatment even later in life, they identify possible drug targets, and they provide a pathway for developing treatments for the core symptoms of ASD. Clinical trials in toddlers have demonstrated the value of early behavioral intervention, with gains in behavior and function as well as the first demonstration of measurable changes in brain activity in response to intervention.70–75, 78 Several trials are currently underway, ranging from exploratory trials of novel interventions to tests of treatments that are already in current use in the community. Over the past 5 years, a large clinical network has been developed, several pharmaceutical companies have become engaged in ASD research, and new technologies have emerged that may prove transformative. This field still requires standardized, sensitive outcome measures and biomarkers that can both stratify the heterogeneous ASD population and serve as rapid indicators of clinical response.

Recent studies have revealed the tremendous service needs within the community, with data showing that young adults transitioning out of the educational system frequently lose their services access and often have limited opportunities for employment and independent housing.79–82 While more data are required on the needs of adults with ASD so that services can be more appropriately targeted, there is already an opportunity to collect data on the effectiveness of current services being delivered in the community through projects such as federally-funded state demonstration projects. In some cases, it may also be possible to do comparative studies that could begin to make improvements in services for adults in the near term.

One of the most encouraging signs of progress has been the expansion of research infrastructure over the past 5 years, helping the scientific community embrace a culture of data integration and sharing. Several large scale government-funded research centers, privately funded efforts, and some public-private collaborative projects have been built in the past 5 years. The National Database for Autism Research (NDAR), an NIH-funded hub that stores and shares aggregate data, from exomes to images, has grown to include over 70,000 human subjects. Efforts such as the government-funded NIH Neurobiobank and the privately-funded Autism BrainNet

have been established to try to expand the supply of available brain and other tissue samples for ASD and brain disorder research. In addition, the Interactive Autism Network (IAN)

give families the opportunity to share data and participate in new models of more rapid, interactive clinical trials, expanding the possibilities for future research.

Relative to many other areas of biomedical research, ASD science is still a young field. While the past 5 years have seen rapid growth and substantial scientific progress, the Committee recognizes the large gap that still remains between advances made in research settings and practical benefits that are ready to be delivered to individuals and families living with ASD today. We remain far from the overall intention of the IACC Strategic Plan to foster research that will yield tangible improvements in quality of life for people with ASD across all settings and communities. An intensified effort will be needed to ensure that recent promising discoveries are rapidly translated into clinical practice and services that will improve quality of life for individuals with ASD.

In conducting this review, the Committee recognized several core needs that spanned across multiple areas on the research portfolio:

History may identify the past 5 years as an inflection point for our understanding of ASD. Increased investments from both private and government sources, improved resources for research, and expanded communities of scientists entering this field all provide hope that recent progress will accelerate. Many new areas of science, from the microbiome to social prosthetics, may transform our understanding of ASD with entirely new tools for interventions. One of the greatest challenges will be finding the right balance between science that can immediately improve quality of life for individuals with ASD and science that seeks to gain fundamental knowledge about ASD with the promise of prevention or cure in the future. The ASD community has a diversity of views on how to set this balance, with some focused on identifying the causes with the goal of preventing ASD, reducing disability or finding a cure, while others focus on accommodation, inclusion, and acceptance. In the near term, science can serve both sets of goals to develop a deeper understanding of the many forms of ASD and enhance interventions, services and supports that can offer individuals with ASD opportunities for independence and full participation in community life.

The tables include data (project numbers and funding) from Federal and private funders of ASD research for years 2008 through 2012, as aligned with the objectives of the 2011 IACC Strategic Plan. They also include summaries (based on discussions during the 2013 IACC Strategic Plan Update Workshop) of progress on reaching the goals of each objective, as well as remaining gaps, needs, and opportunities. Please note the following:

The middle five columns of the table contain the data (project numbers and funding) for each individual year from 2008 to 2012, with the objective number (as it appeared in the annual Portfolio Analysis) listed above it. The IACC recommended budget listed below the project data represents the most updated budget listed in 2011 Strategic Plan. If the recommended budget has been revised since 2008, the year the revision took place is found in parentheses following the budget figure. Therefore, if there is no mention of a revision, the IACC recommended budget has remained constant from 2008 to 2011. The annual project status for each objective from 2008 to 2012 is indicated within the table by colored highlighting of the objective number. An objective is considered active if its status is green or yellow, and inactive if its status is red.

The far right column of the table lists the sum of the total funding aligned with each objective from 2008 to 2012. Highlighting of each total gives an indication of the progress toward fulfilling each objective.

1 Please note that while the green, yellow and red indicators suggest a funding status for each year and that looking across all years may give some indication of a trend, that some agencies and organizations provide all the funding for multiyear grants in a single year, resulting in the appearance of "less funding" in other years, but that projects fulfilling the objectives may still have been ongoing in the years where the funding appears to be less. Thus, it is important to note the numbers of projects in looking across the chart, and to keep in mind that in a series, where, for example, most of the indicators are green, that the objective is likely to be largely "complete" according to the funding-based measure.

The Interagency Autism Coordinating Committee (IACC) is a federal advisory committee charged with coordinating all activities concerning autism spectrum disorder (ASD) within the U.S. Department of Health and Human Services (HHS) and providing advice to the Secretary of HHS on issues related to autism. It was established by Congress under the Children's Health Act of 2000, reconstituted under the Combating Autism Act (CAA) of 2006, and renewed under the Combating Autism Reauthorization Act (CARA) of 2011.

Membership of the Committee includes a wide array of Federal agencies involved in ASD research and services, as well as public stakeholders, including self-advocates, parents of children and adults with ASD, advocates, service providers, and researchers, who represent a variety of perspectives from within the autism community. This makeup of the IACC membership is designed to ensure that the Committee is equipped to address the wide range of issues and challenges faced by families and individuals affected by autism.

Through these and other activities, the IACC provides guidance to HHS and partners with the broader autism community to accelerate biomedical research and enhance services with the goal of profoundly improving the lives of people with ASD and their families.

The Committee would like to thank the following external experts who volunteered their time to assist with the development of the 2013 IACC Strategic Plan Update.