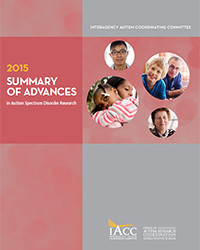 Articles Selected for the 2015 Summary of Advances

Age at autism spectrum disorder (ASD) diagnosis by race, ethnicity, and primary household language among children with special health care needs, United States, 2009–2010: In the US age of ASD diagnosis is decreasing; however, there is limited evidence about discrepancies between race/ethnicities in age of diagnosis even though non-Hispanic-white children are still more likely than either black or Hispanic children to be diagnosed with ASD. Read more.

The idiosyncratic brain: distortion of spontaneous connectivity patterns in autism spectrum disorder: Research that helps scientists understand differences in how the brain is structured and how it functions in people on the autism spectrum compared with neurotypical individuals not only increases scientific knowledge about autism but also provides a way to potentially characterize the severity of ASD symptoms and ultimately helps to provide a path for developing effective interventions. Read more.

Administration of thimerosal-containing vaccines to infant rhesus macaques does not result in autismlike behavior or neuropathology: This study examined whether exposure to vaccines containing ethyl mercury (found in the vaccine preservative thimerosal) or the measles, mumps, and rubella (MMR) vaccine could be demonstrated to be linked to development of autism-like symptoms in an animal model. Read more.

Effect of parent training vs parent education on behavioral problems in children with autism spectrum disorder: a randomized clinical trial: Children with autism often exhibit disruptive behavior (e.g. tantrums, aggression, self-injury), which can interfere with the children’s daily functioning, while also posing a challenge for parents and caregivers. Read more.

The health status of adults on the autism spectrum: Recognizing that children with ASD have higher rates of co-occurring medical and psychiatric illnesses compared to the general pediatric population, the authors decided to explore whether this is also the case in adults with ASD, compared with the general population. Read more.

While no articles directly related to Question 7: What Other Infrastructure and Surveillance Needs Must Be Met? were selected by the Committee for inclusion in the final 2015 IACC Summary of Advances in Autism Spectrum Disorder Research, three articles were nominated in this category, and they are listed in the Full Listing of Nominated Articles.