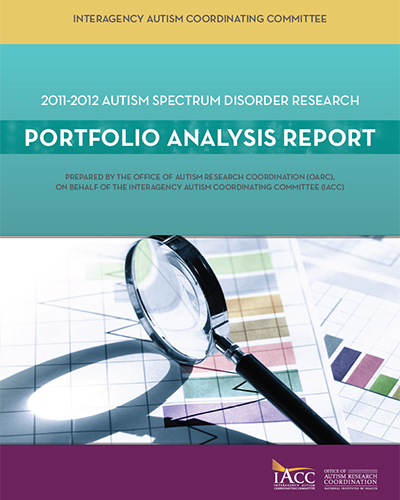 To better understand what areas of research were funded in 2011 and 2012, projects were aligned with the corresponding questions in the 2011 IACC Strategic Plan. Figures 8 and 9 illustrate the breakdown of the research funding according to the Strategic Plan’s seven questions related to Screening and Diagnosis, Biology, Risk Factors, Treatments and Interventions, Services, Lifespan Issues, and Infrastructure and Surveillance. Identifying how current research investments correspond to the Strategic Plan provides an understanding of how funders have directed investments across each of the priority areas identified by the IACC, as well as an indication of which areas are well supported versus those that may be in need of additional attention or development.

Figure 8. Topic areas are defined by each question in the IACC Strategic Plan. The seven questions of the Strategic Plan are represented in the clockwise direction, beginning with Screening and Diagnosis (Question 1) and ending with Infrastructure and Surveillance (Question 7).

Figure 9. Topic areas are defined by each question in the IACC Strategic Plan. The seven questions of the Strategic Plan are represented in the clockwise direction, beginning with Screening and Diagnosis (Question 1) and ending with Infrastructure and Surveillance (Question 7). Due to rounding, the percentages do not equal 100%.

ASD research funding in 2011 and 2012 supported projects relevant to all seven of the critical questions in the IACC Strategic Plan for ASD Research, and the distribution across the seven questions was similar in both years. As in previous years, the largest portion of funding addressed the underlying biology (Question 2) of ASD (24%, 2011; 30%, 2012). This was followed closely by research aimed at identifying potential causes and risk factors (Question 3) for the disorder (20%, 2011; 17%, 2012). Funding of research into treatments and interventions (Question 4) for ASD, including behavioral therapy, pharmacological treatments, and technology-based interventions, increased from 2010 levels (17%, 20%, and 19% in 2010, 2011, and 2012 respectively). Investment in research infrastructure and surveillance (Question 7) also increased from 2010 levels (12%, 15%, and 14% in 2010, 2011, and 2012 respectively). This investment includes funding for data repositories such as the National Database for Autism Research (NDAR) and the Autism Genetics Resource Exchange (AGRE), as well as surveillance, including studies of ASD prevalence conducted by the Centers for Disease Control and Prevention (CDC).

By comparison, funding of research aimed at improving screening and diagnosis (Question 1) of ASD remained similar to previous years (11%, 10%, and 11% in 2010, 2011, and 2012 respectively). Investment in services research reported in 2011 and 2012 was 9% and 7%, respectively. These figures represent a decrease from the investment reported in 2010 (16% of the overall portfolio), but much of the change can be attributed to the prorated adjustments made in reporting in service-related funding. This proration resulted in a lower level of funding reported for services-related Strategic Plan questions (Questions 5 and 6) in 2011 and 2012 compared to previous years. Funding of research specifically centered on lifespan issues (Question 6) remains the smallest area of investment (2% and 1% in 2011 and 2012 respectively).

Figure 11. 2012 Projects aligned to Strategic Plan questions. Due to rounding, the percentages do not equal 100%.