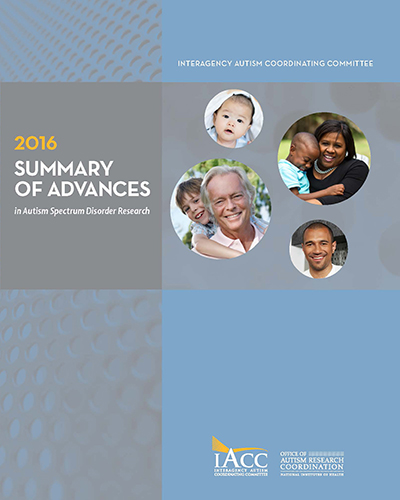 Articles Selected for the 2016 Summary of Advances

Reduced engagement with social stimuli in 6-month-old infants with later autism spectrum disorder: a longitudinal prospective study of infants at high familial risk: The average age of an ASD diagnosis in the U.S. is approximately 4 years old. Research has shown that up to 20% of infants who have an older sibling with ASD will also be diagnosed with ASD later in their lives. Parents may suspect ASD prior to a formal diagnosis, particularly if their infant has a sibling with an ASD diagnosis. Read more.

Peripheral mechanosensory neuron dysfunction underlies tactile and behavioral deficits in mouse models of ASDs: Unusual or increased sensitivity to touch is a common symptom in individuals with ASD. The experience of touch in early childhood is important for the development of social behaviors and communication, and it is possible that hypersensitivity to touch can contribute to social and communication challenges later in a child’s life. Read more.

Effect of co-twin gender on neurodevelopmental symptoms: a twin register study: There is a higher prevalence of ASD and attention-deficit/hyperactivity disorder (ADHD) in males than females. There is evidence of significant heritability in both ASD and ADHD, but there are also thought to be significant environmental factors involved in risk of diagnosis. For instance, past research suggests that exposure to high levels of testosterone in the womb may increase the risk for development of ASD and ADHD. Read more.

Prevalence and characteristics of autism spectrum disorder among children aged 8 years—Autism and Developmental Disabilities Monitoring Network, 11 sites, United States, 2012: Ongoing efforts to monitor the prevalence of ASD are important to substantiate the need for service and treatment programs, identify vulnerable populations, justify increased funding, and support new policies. The Autism and Developmental Disabilities Monitoring (ADDM) Network is a group of programs funded by the Centers for Disease Control and Prevention (CDC) to monitor the prevalence and characteristics of ASD in 8-year-old children (the age by which most children have been diagnosed). Read more.