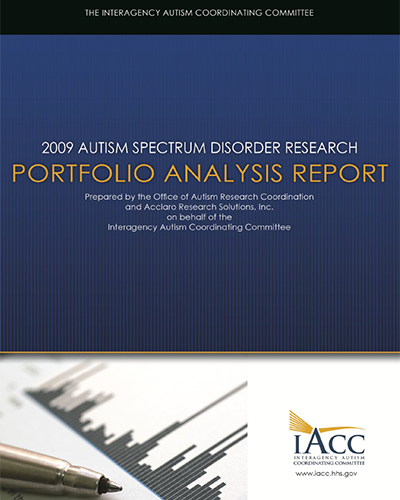 To better understand what areas of research were funded in 2009, projects were aligned with the corresponding questions in the 2010 IACC Strategic Plan. Figure 4 illustrates the breakdown of the research funding according to the Plan's seven critical questions related to diagnosis, biology, risk and protective factors, treatments, services, lifespan, and infrastructure and surveillance. Identifying how current research investments correspond to the Strategic Plan aids in providing an understanding of the current main areas of focus in the field as well as areas that are in need of further development.

Figure 4. Topic areas are defined by each question in the Strategic Plan. In 2009, the largest proportion of ASD research funding (32%) was devoted to risk factors for ASD (Question 3); 20% of the research was related to interventions and treatments (Question 4); 20% addressed the underlying biology of ASD (Question 2); 14% related to diagnosis (Question 1); and 5% related to infrastructure and surveillance (Question 7). Research on services and lifespan issues (Questions 5 and 6) received just over 3% of the total funding provided, while 5% of ASD funding was not specific to Strategic Plan questions.

As in the prior year, 2009 ASD research funding supported projects relevant to all critical questions in the Strategic Plan. Funding varied by question, with the largest proportion of funding (32%) devoted to topics associated with Question 3, "What Caused This To Happen and Can It Be Prevented?." Research related to treatments/interventions and targeting the underlying biology of ASD (Questions 4 and 2, respectively) ranked second and third, each receiving 20% of ASD funding. In contrast, sparse funds were devoted to ASD services (Question 5) and issues that people with ASD face across the lifespan (Question 6), accounting for 3% and less than 1%, respectively.

Research funding received from NIH-ARRA followed a similar pattern to overall ASD research funding. Research related to Question 3 received the most NIH-ARRA funding (44%), indicating an increased emphasis on identification of risk factors, followed by research funding for Question 2 (19%) on the underlying biology of ASD. As with overall 2009 ASD research funding, research associated with services and lifespan issues received the least NIH‑ARRA funding (4% and 1%, respectively). Though small, these percentages do, however, indicate a slightly greater emphasis on these two areas in the NIH-ARRA funding in comparison with the overall funding for autism research across all agencies and organizations (3% and <1%, respectively, as noted in Figure 4). Notably, in the NIH-ARRA funding, only 1% was allocated to projects outside the scope of the Strategic Plan, reflecting the deliberate effort of NIH to focus its ARRA funding on priority areas identified by the IACC. The allocation of NIH-ARRA funding by Strategic Plan question is illustrated in Figure 5.