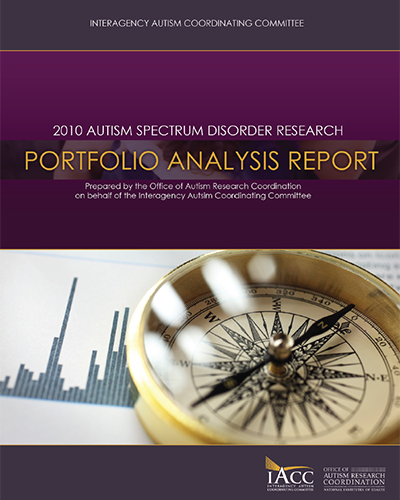 To better understand what areas of research were funded in 2010, projects were aligned with the corresponding questions in the 2011 IACC Strategic Plan. Figure 3 illustrates the breakdown of the research funding according to the Strategic Plan's seven questions related to diagnosis, biology, risk factors, treatments and interventions, services, lifespan issues, and infrastructure and surveillance. Identifying how current research investments correspond to the Strategic Plan provides an understanding of how funders have directed investment s across each of the priority areas identified by the IACC, as well as an indication of which areas are well supported versus those that may be in need of additional attention or development.

Figure 3. Topic areas are defined by each question in the IACC Strategic Plan. The seven questions of the Strategic Plan are represented in the clockwise direction, beginning with Diagnosis (Question 1) and ending with Infrastructure and Surveillance (Question 7). In 2010, the largest proportion of ASD research funding was devoted to understanding the underlying biology of ASD (Question 2; 22%); 20% of the research was related to identifying risk factors for ASD (Question 3); 17% addressed treatments and interventions (Question 4); 16% related to services (Question 5); 12% covered scientific infrastructure and surveillance (Question 7), and 11% related to diagnosis (Question 1). Research on lifespan issues (Question 6) received 2% of the total funding provided.

As in previous years, 2010 ASD research funding supported projects relevant to all critical questions in the Strategic Plan. The largest portion of funding addressed the underlying biology of ASD (22%; Question 2), followed closely by identifying potential causes and risk factors for the disorder (20%; Question 3). Treatments and interventions for ASD, including behavioral therapy, classroom interventions, pharmacological treatments, and dietary interventions, accounted for 17% of ASD research funding in 2010. The greatest increase in proportion of funding was in the services section of the Strategic Plan (Question 5), which grew from 3% in 2009 to 16% in 2010. Much of this increase was attributed to additional projects reported by the Health Resources and Services Administration (HRSA), largely related to practitioner training. The next largest category of funding was scientific research infrastructure (12%; Question 7). This includes data repositories such as the National Database for Autism Research (NDAR) and the Autism Genetics Resource Exchange (AGRE), as well as surveillance, including studies of ASD prevalence conducted by the Centers for Disease Control and Prevention (CDC). Research on autism screening and diagnosis accounted for 11% of ASD funding in 2010, with nearly the same amount of funding as 2009.

Overall, 2010 ASD research funding was more evenly distributed among the questions of the Strategic Plan than in previous years. This change in distribution is partially due to more comprehensive reporting of ASD projects by Federal services agencies, which increased services funding (Question 5) to levels comparable to other areas. Although lifespan issues funding (Question 6) is proportionally smaller than the other areas, the funding for this question increased more than four-fold from 2009 levels. The IACC highlighted this as an area of needed growth, and funders have responded to this emerging area that merges services needs through the lifespan with new scientific research on the how the aging process affects individuals with autism.